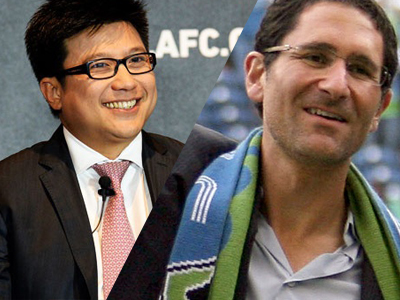 The Business of MLS with Adrian Hanauer and Henry Nguyen '95

As Owner and former General Manager, Adrian Hanauer has led the Seattle Sounders FC to extraordinary success since the Club joined Major League Soccer in 2007. In 2014, the Sounders won the US Open Cup and the Supporters' Shield. Attendance at Sounders FC home games averages 44,000 fans, twice that of the next highest attended MLS Club and compared to the world, the Sounders FC ranks 27th in match attendance. On game days, rave green takes over Seattle and matches at CenturyLink Field are considered some of the best live soccer viewing experiences in the world.

Henry Nguyen, Harvard College '95 graduate, is one of the owners of LA FC. Henry praises Seattle and says, "A soccer match in Seattle, it's an experience. And it's a culture," (LA Times). Hear from Henry about his team's plans to build another wildly successful MLS Club to launch in 2017. Both extraordinary leaders will talk about their vision of Major League Soccer's future, the challenges they have encountered, and how they have overcame those setbacks to succeed.

This fireside chat will be moderated by Ling Lin '12. Submit questions in advance to be included in the discussion.

See who else is coming on our Facebook event.