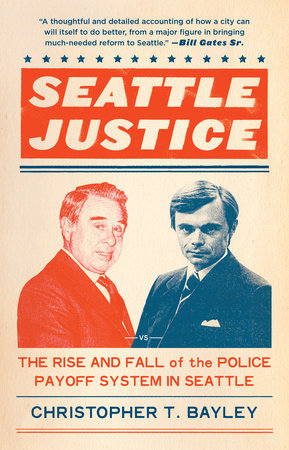 Join us for the launch of Seattle Justice by Former King County Prosecutor Chris Bayley '60, JD '66

Despite its current reputation as a progressive and high-tech city, Seattle had a 100-year history of vice and official corruption. The system involved city officials turning a blind eye to illegal gambling, unlicensed bars, and prostitution, in exchange for which police officers demanded "operating fees" in the form of cash payments from establishment owners. The money trail that started on sordid streets traveled high up in the Seattle Police Department and affected top levels of both city and county government.

Seattle Justice captures the true story of how vice and payoffs became the rules of the game in a city where officials were comfortable with corruption, and what it took to clean it up, proving a city can reexamine the way it operates and fight to improve. The book tells of Mr. Bayley's upset election in 1970 followed by a grand jury that indicted many officials including his predecessor and the former sheriff. It describes his reforming the office into a “justice model” whose values radiate by example up to the courts, down to the police and outward to the whole community. Mr. Bayley argues that the public prosecutor should lead in creating this model and believe that if it had been in place in communities like Ferguson, the tragedies there and elsewhere might have been prevented.

You may preorder your copy at: www.randomhouse.com/book/251807/seattle-justice-by-christopher-t-bayley