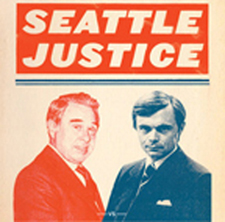 Meet Former King County Prosecuting Attorney Chris Bayley '60, JD '66, and hear him speak on: Seattle Justice, from Past to Present

$25 includes reception and admission to the lecture. You must purchase tickets in advance. Pick up tickets at the door.

This is a partner event, sponsored by Town Hall Seattle.

You may preorder your copy of Seattle Justice at: www.randomhouse.com/book/251807/seattle-justice-by-christopher-t-bayley

Seattle Justice captures the true story of how vice and payoffs became the rules of the game in a city where officials were comfortable with corruption, and what it took to clean it up, proving a city can reexamine the way it operates and fight to improve. The book tells of Mr. Bayley's upset election in 1970 followed by a grand jury that indicted many officials including his predecessor and the former sheriff. It describes his reforming the office into a “justice model” whose values radiate by example up to the courts, down to the police and outward to the whole community. Mr. Bayley argues that the public prosecutor should lead in creating this model and believe that if it had been in place in communities like Ferguson, the tragedies there and elsewhere might have been prevented.